You are here: Home » How to Safely Use a DSMB 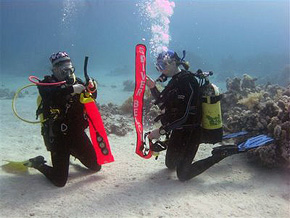 How to Safely Use a DSMB

How to Safely Use a DSMB

A DSMB or “Delayed Surface Marker Buoy” is a surface marker buoy carried by the diver and is deployed at some point during a dive to mark the position of the diver to surface craft. The DSMB is usually a sausage shaped buoy which is kept deflated and rolled up ready for use with a reel of nylon line.

Typically a DSMB would be sent up by a diver in the following circumstances:-

Basic open ended DSMBs are cheap and readily available and they are their best attributes. If not inflated properly they can fall over and deflate on the surface and then drop back down towards the diver presenting an entanglement hazard as the nylon line drops with the buoy.

Open ended DSMBs with a restrictor are the most common in use. The restriction is usually a narrowing in the buoy about 6 inches above the open end. As the buoy inflates due to the air expanding inside during its ascent, the restriction causes the end of the buoy to close over, a clever little trick that prevents the buoy deflating if it falls over at the surface. Other methods adopted by manufacturers can include thin lead strips in the open end which drop down and seal the tube if the buoy falls over.

Open ended tube with restriction and 0.1L air cylinder are quite expensive due to the need for a cylinder and valve but allow for very easy inflation but must be used with care.

When and How to Deploy the DSMB

There are two main arguments about when to deploy a DSMB, deep or shallow!

Making an ascent from depth without reference other than a computer requires a great deal of skill and concentration and is made much easier if you can deploy a DSMB and use the line and reel as reference. Ascending without reference can easily result in runaway ascents followed by an unwanted descent as the diver dumps excessive air to control the ascent. It is much easier to ascend up the DSMB line when the rate of reel clicks or turns can also be used as a guide to the ascent rate. Deploying from depth gives you the option to first secure the reel to the wreck allowing you to sort out any reel jams or snags

Assuming you have made a good ascent to your stop depth, if you then deploy a DSMB you run the risk of losing buoyancy as you are distracted by the task resulting in an unwanted descent or ascent. Deploying a DSMB mid water gives you only one option if the reel jams:- let go of it or risk being dragged up by it.

There is a golden rule whichever DSMB you use. Never deploy it whilst the reel is clipped to you! Always unclip the reel from your BCD. If possible secure it to part of the wreck before sending the buoy up from depth. Think back to your Open Water course and decide how much air you will need to put into the buoy. Remember Boyles Law? At 30M you will only have to ¼ fill the buoy. By the time it reaches the surface it will be fully inflated. Look up and check that it is safe to send the buoy up from that location. When the buoy is released it will rise very quick in the water column and could cause injury to a diver above. The shallower you are, the more you will have to inflate the buoy to ensure it is full at the surface. By attaching the reel to part of the wreck inflating the buoy will have no influence on your buoyancy. If deploying away from the wreck or reef inflating the buoy will affect your buoyancy so it is important that you have good buoyancy control. If using a finger reel you do not have the option to attach it to anything whilst deploying a DSMB

The inflation method depends on the DSMB. Firstly unclip the buoy and open it out. Using one of the inflation methods add just enough air to get the buoy to stand vertical in the water. Basic open ended buoys can be inflated directly from the alternate air source (Octo) or by using the exhaled air from the divers primary reg. In either case care should be taken not to get either reg tangled in the DSMB line or the reel mechanism. The exhalation method initially has little effect on buoyancy as air exhaled is captured in the buoy. Subsequent exhalations into the buoy will make the diver slightly positively buoyant upon each breath. It is important with either method not to delay in the process otherwise buoyancy adjustment will be necessary and this can be tricky with hands full of reel and regs.

DSMBs with their own air cylinders are much easier to inflate. Open the valve until sufficient air is added dependent upon depth and then close the valve just before releasing the buoy. This very important. If the valve is left open the cylinder will empty and this will allow water to enter the cylinder and will lead to internal corrosion which could cause the cylinder to fail during refilling!

DSMB with an oral filling valve are inflated by the diver blowing the buoy up orally. Care should be taken not to tangle the regulator in the DSMB line. The inflation valve can also accept a direct feed hose from a BCD or dry suit however it is configured in such a way that the hose will not clip onto the valve and is released as soon a hand pressure is removed

DSMBs using single use CO2 cartridges are generally sealed buoys. The diver merely has to unroll the DSMB and then pull a toggle to fire the cartridge and inflate the buoy. The cartridge volume is matched to the size of the buoy so it is fully inflated at the surface.

Once inflated the diver has no option other than to release the DSMB so it is essential that the diver makes sure there are no overhead hazards before inflation. Reels differ in operation from ratchet reels to simple finger reels. Make sure you know how the reel works, practice on land and then in shallow water first. Be prepared to let go of the reel if needs be!

The diver starts a normal swimming ascent once any slack in the DSMB line is taken up by winding the reel. The line is wound in as the ascent progresses. It is useful to remain slightly negatively buoyant to retain slight tension on the DSMB line during the ascent and any safety / decompression stops. Once the diver is familiar with the particular reel in use the rate of reel ratchet clicks or turns can be used to complement the ascent rate indicator on a dive computer. Care should be taken not to outrun the reel and have loose line floating about due to the chances of becoming entangled.